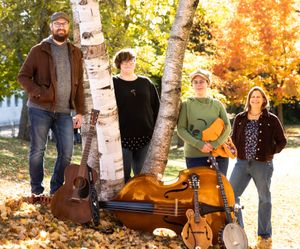 Onion Honey may hail from Ontario’s tech capital, but they make foot-stomping, toe-tapping, hoedown-ing folk music like an old-fashioned string band. Dave Pike, Esther Wheaton, Leanne Swantko, and Kayleigh LeBlanc play traditional tunes made new and original songs that sound old; like their name, Onion Honey’s music is sweet and sharp and savoury, a remedy for many ills, and a recipe for a good time. Influenced by bands like Uncle Earl, Old Crow Medicine Show, and the Foghorn Stringband, the Kitchener-based outfit brings a uniquely-Southwestern-Ontario flavour to their music.

Onion Honey has been heard on radio stations across Canada and featured in Jan Hall’s Sunparlour Sessions; their last two albums, Raisin’ Heck and Earthly Trials, charted on national campus radio in 2017 and 2019. They gig regularly around Southwestern Ontario and have performed at a number of festivals including Banjofest in Guelph, Cambridge’s Mill Race Folk Festival, Winterfolk in Toronto, Hamilton's Festival of Friends, and more. 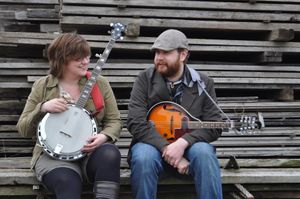 Esther Wheaton (banjo, vocals, washboard) and Dave Pike (banjo, mandolin, guitar, vocals) met in 2011 when their former bands (Banjo & the Bellows and A Yellow Field) shared a billing at The Boathouse - a Kitchener, Ontario institution. Dave insinuated himself into Esther’s band, and when The Bellows dissolved the two started their own old-time project. They recorded and released their first full-length album, Don’t Bother Me None in 2013.

In 2014 Onion Honey acquired two new band members - Michelle Horel (a long-time friend of the band) on banjolele and vocals, and Stuart Cybulskie (an amazing Kijiji find) on double bass. As a quartet they performed at Toronto’s Winterfolk Festival, Cambridge’s Mill Race Folk Festival, Kitchener’s Summer Lights Festival, and many other events as well as establishing their regular gigs at the Grand Trunk Saloon (first Wednesday of every month) and Seven Shores Cafe (second Sunday of every month). This lineup appears on their 2014 EPs Pocket Pair and Home Before the Snow, and 2017 album Raisin’ Heck. 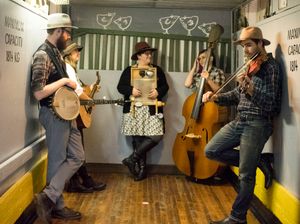 2017 also saw a lineup change as Michelle and Stuart left the band, replaced by Keenan Reimer-Watts on fiddle (kidnapped from a new music ensemble), Leanne Swantko on guitar (another amazing Kijiji find), and Kayleigh LeBlanc on double bass (Esther’s old university roommate). As a quintet they recorded holiday EP Layers, were featured in the Sunparlour Sessions and performed all over Southwestern Ontario from Owen Sound to Niagara Falls, appearing at Jarvis Ontario’s Welcome Home Festival, the Balls Falls Thanksgiving Festival, Waterloo’s Belmont Village Bestival, the Goderich Downtown Shuffle, KW’s Hold the Line Festival, the Open Ears Festival of Music and Sound, and much more. 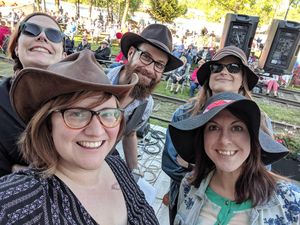 In early 2019 Keenan left the band for his own artistic pursuits and Onion Honey was joined by a rotating cast of fiddle players and other friends, most frequently Alison Corbett. The band’s third full-length album, Earthly Trials was recorded and released by this lineup in 2019.

Onion Honey has been heard on radio stations across Canada and both Raisin’ Heck and Earthly Trials charted on national campus radio. They perform regularly around Southwestern Ontario at festivals and fairs, parties and weddings, saloons and cafes, galleries and libraries, and pretty much everywhere else.

The Oldest Man I Know

Nicolette and the Nobodies